How TextNow Streamlined Its Hiring Process 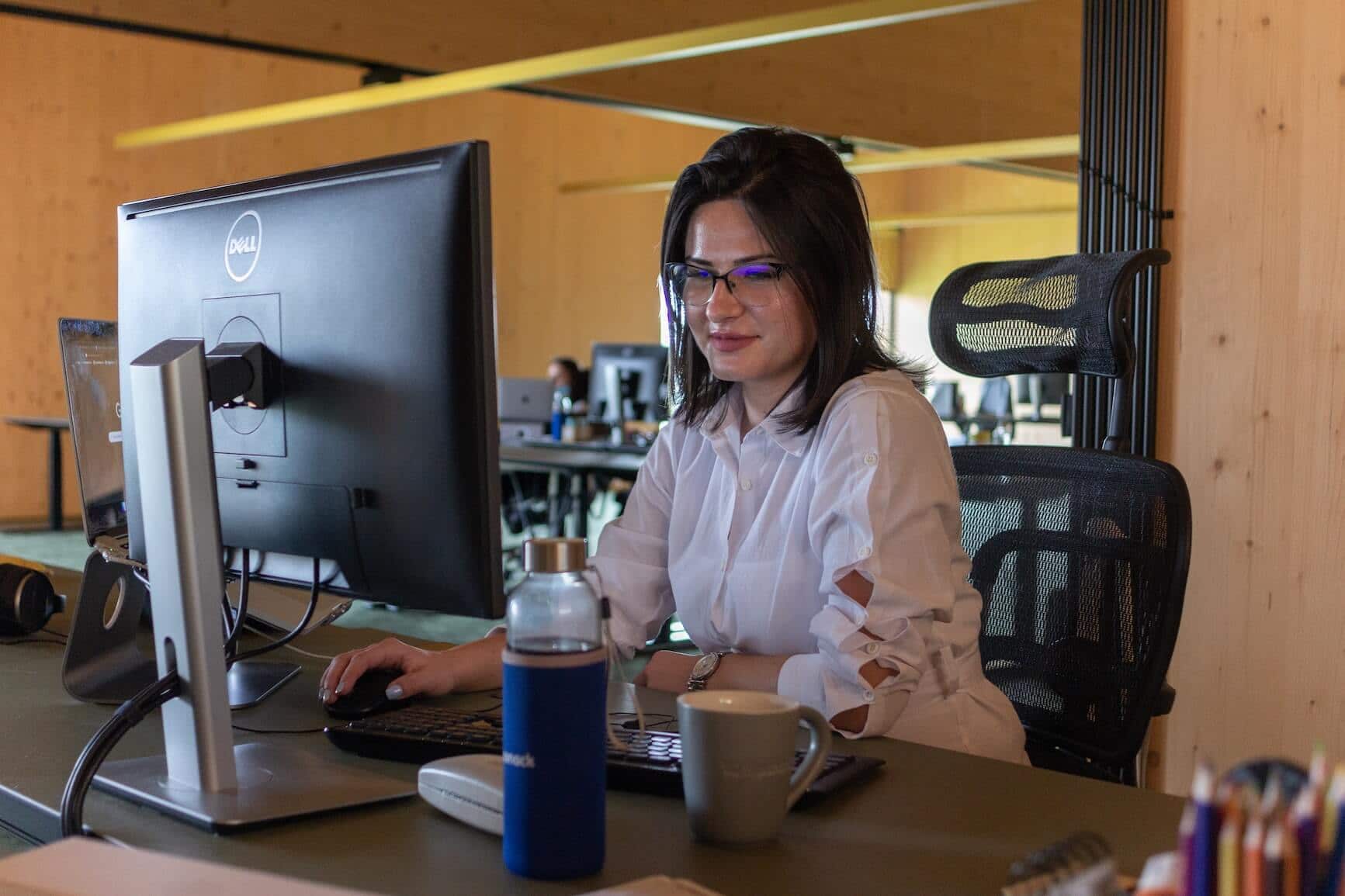 But it’s not enough to simply invest in such a solution. Talent specialists and recruiters also need to make the most of their tech to improve in key areas and streamline the hiring process.

TextNow, a free texting and calling app, already had LeverTRM at the heart of its tech stack when VP of Talent Suzanne Salzberg and Recruiting Operations Manager Austin Nelson joined.

Upon joining, though, it became clear their TA org wasn’t tapping into the full potential of our native, unified ATS + CRM. So, the talent leaders made sure their team revamped its recruitment process — and lessened its reliance on outside agencies to source top talent — to achieve its hiring quotas and enhance critical metrics like time to fill and hire.

TextNow’s goal: Make better use of LeverTRM to enhance its hiring process — including time to fill

Having chosen to implement Lever at previous companies over competing ATS solutions — mainly due to our platform’s ease of use, user-friendly interface, and robust analytics capabilities — Suzanne and Austin both knew the value it could provide TextNow.

Suzanne identified how the team did not integrate Lever with other crucial TA and human resources technologies to ensure strong data integrity and data ‘flow’ between systems.

What’s more, the TextNow team was also still heavily reliant on agencies to find quality candidates and did not leverage LeverTRM’s advanced sourcing functionality (e.g., list job postings to multiple job boards with ease) to find qualified candidates on its own.

Fragmented talent data and not taking advantage of all Lever has to offer (e.g., automated workflows, nurture campaigns) led to an average time to hire of 80 days — a figure Suzanne and Austin realized they needed to address ASAP. It also led to a stagnant and not-so-diverse candidate pool and a lack of long-term relationships with candidates.

“The team was ignoring leads in the Lever pipeline,” Suzanne stated. “They weren’t using reminders or nurture campaigns or any of Lever’s built-in tools. Candidates were just sitting there for a long time.”

The first step to speeding up its hiring process? Take ownership of all core recruiting and acquisition activities — including some HR handled due to lack of bandwidth and/or coordination prior to Suzanne and Austin’s arrival (e.g., sending offers) — to streamline the team’s day-to-day operations and build a more scalable and sustainable hiring strategy. 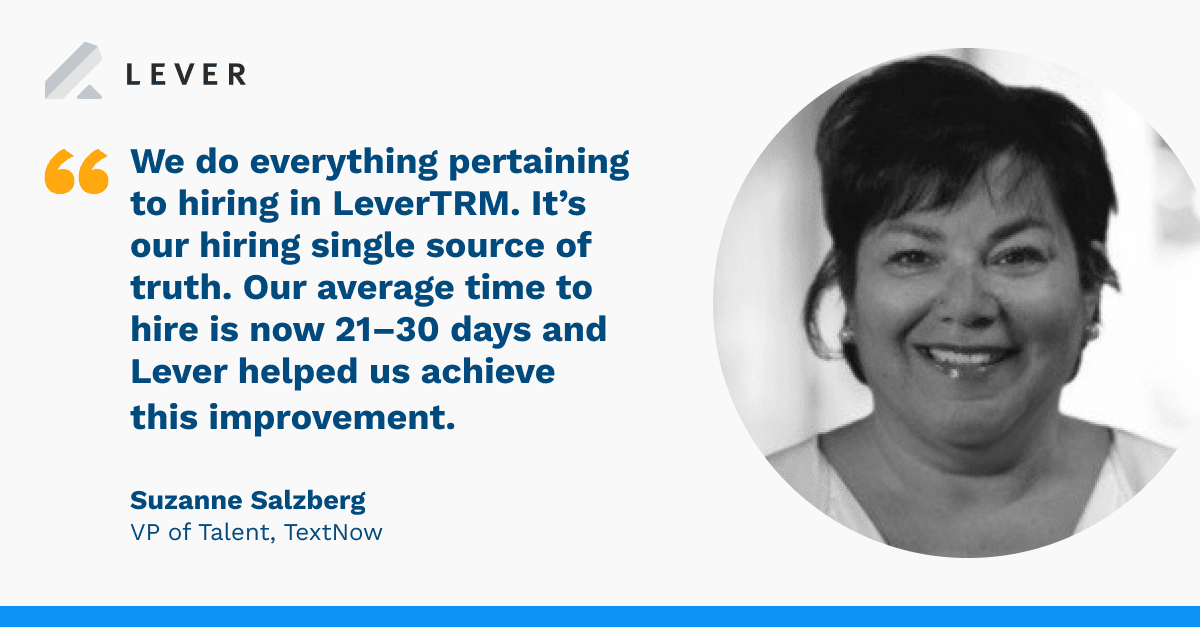 The path to a better hiring process: Getting the TA team and hiring managers on the same page

Changing one’s TA and general hiring process to ensure a diverse array of qualified candidates are hired and in a streamlined, structured manner certainly requires efforts.

Thankfully, the experience Suzanne and Austin had with Lever before joining TextNow made it easy to identify low-hanging-fruit opportunities to strengthen their recruiting.

The pair spent time with both their team and hiring managers to get on the same page regarding how they can develop a more seamless talent acquisition approach:

On top of this internal coordination, Suzanne eliminated outside agency help for finding first-class talent. Instead, sourcing was moved 100% in house so the team could ‘own’ the process entirely, which led to money saved and greater transparency on candidate quality.

The results of these efforts — and a modified approach to using LeverTRM — led to:

The work to properly utilize LeverTRM and the rich talent data it provides to augment its hiring process and TA strategy at large (e.g., adjusting its interview processes and stages, better liaising with hiring managers, posting open positions in the right places) is ongoing.

But the renewed focus Suzanne, Austin, and Co. focus have placed on capitalizing on LeverTRM to source, nurture, interview, and hire new employees has led to significant ROI.

“If you use [TA tech] the way it was designed, you’re just going to get better results all the way,” Suzanne noted. “And then the company thinks you’re magic, and you’re like, ‘Well, actually, we’re just doing it the right way, right?’ That’s been my experience with Lever.”

Check out our entire TextNow case study to learn how the company was able to streamline and speed up its hiring process using LeverTRM as its go-to talent acquisition technology.

How Our Hiring Team Makes the Most of LeverTRM

The irony of the Lever hiring team using our very own talent acquisition suite — that is, the industry's only native ATS + CRM solution — to recruit and hire top talent isn't lost on us. That said: Why wouldn't...
Read more

How Recruitment Analytics Can Enhance Your Hiring

Data and insights help marketing, sales, product, and other teams across companies execute (and excel) in their day-to-day. Talent acquisition teams would be wise to do the same: use recruitment analytics to improve their candidate sourcing, engagement, and conversions. There's...
Read more