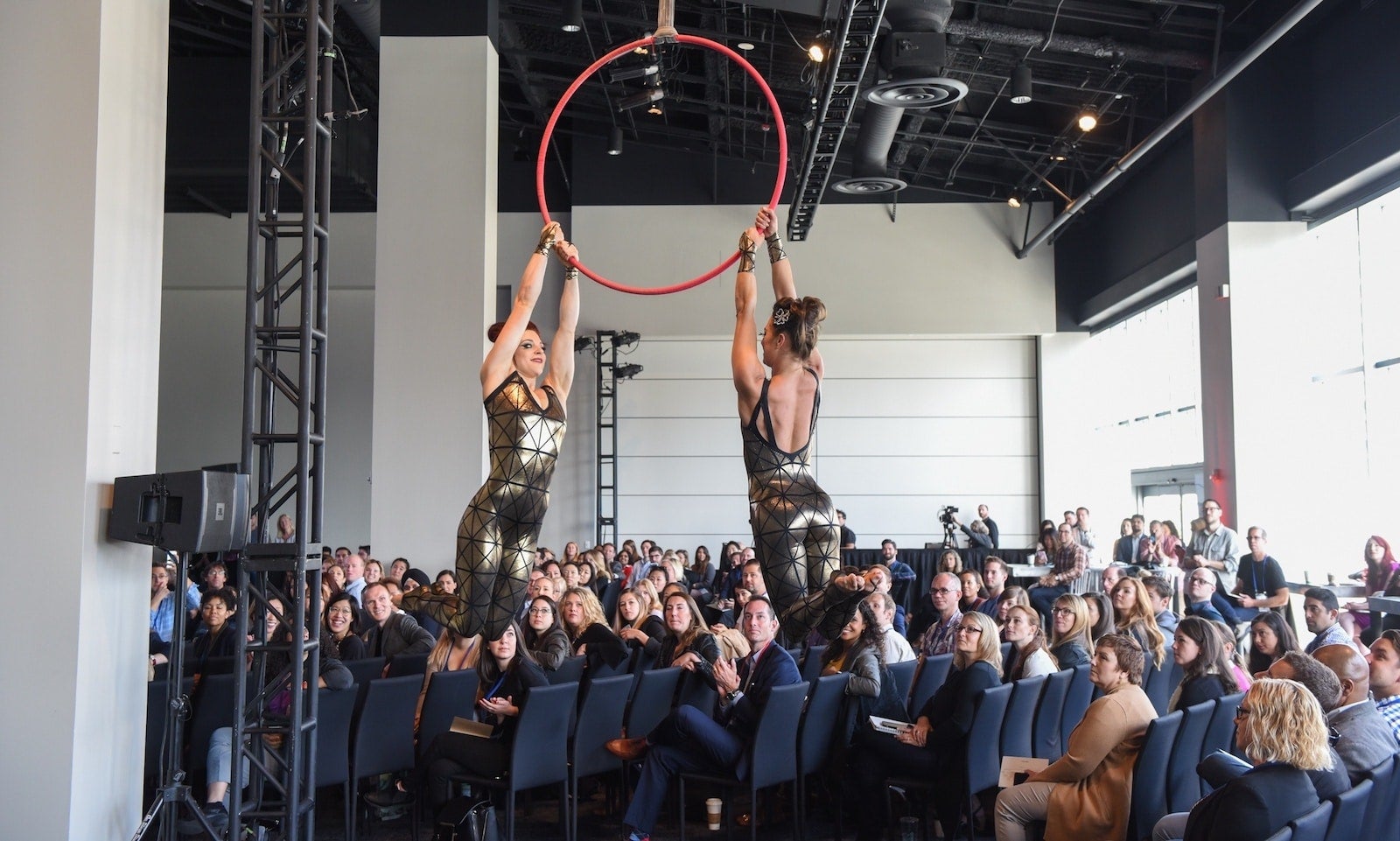 Back in the office after our two-day long Talent Innovation Summit, we are the best kind of exhausted. First off, we want to thank the remarkable speakers, sponsors and attendees who made our event so special. And a shoutout to our talent community around the world that couldn’t make it in person, but tuned in to our live stream. HotTopic’s Johnny Sanchez articulated exactly how we feel today: “inspired, energized, and ready to innovate”. We’re lucky to have learned from so many of you over the past two days.

This post was surprisingly difficult to write – you guessed it, there’s too much we want to include – but we did want to re-live at least some of our favorite moments. If you missed them, have no fear: our live stream recordings of Day 1 (the Diversity and Inclusion Forum) and our Day 2 keynotes capture much of the action.

15. When Uber’s Bernard Coleman trashed the notion of “mansplaining”

When Bernard Coleman said this during his session on ‘the power of positive psychology in creating allyship’, we nearly doubled over in laughter.

Do some of y’all know what mansplaining is? Good. I can’t really explain it to you. ? @bernardcoleman3 #talentinnovation

Bernard also talked about the concept of ‘micro-inclusions’ – small yet meaningful actions that serve to empower and include others on a daily basis. The opposite of micro-aggressions, in other words. We heartily approve.

14. When we announced our newest product enhancement… Lever Nurture Recommendations!

Last year, we announced Lever Nurture onstage at our Summit. Since then, it’s been gratifying to see teams like Shopify more than double their response rate to cold reach-outs.

This year, we came armed with more exciting news – a significant enhancement to Lever Nurture. With Lever Nurture Recommendations, our customers can go beyond search to resurface rockstar candidates. Far too often, candidates disappear into the depths of an applicant tracking system as soon as the role they’re attached to closes.

This new “Nurture Recommendations” feature from @Lever is impressive. 86% of people found a candidate in their archive. #talentinnovation

13. When Summit attendees got in some serious hang time

Somehow, our Diversity and Inclusion Forum speakers packed a day’s worth of profound insights into an afternoon. The perfect place to process it all was the gorgeous outdoor patio at Dirty Habit.

12. When Michelle Hart changed our Lever vocabulary for good

Familiar with your recruiting performance analytics? If not @Lever up! @michellenhart#talentinnovation

11. When Matt Charney made us feel that California Love

You can always count on Matt Charney to close his talks with a bang. That’s why weren’t surprised when his last two slides featured Tupac and a plug for the Dodgers. We were surprised, however, by many of the eye-opening stats he shared as he explained what Silicon Valley needs to learn from the rest of the world.

We ain’t mad at ya, @mattcharney. Thanks for a fiery, unforgettable session today ?. #TalentInnovationpic.twitter.com/yhMFz43bLu

10. When we got to watch six scenes from ‘When Harry Met Sally”

There are endless parallels between recruiting and dating, but yesterday we saw them in a whole new light. Huge thanks to Alison Mann for showcasing some of the most hilarious ‘When Harry Met Sally’ moments, and ultimately helping us decide what to do this weekend. Movie night here we come.

“Recruiting is like When Harry Met Sally.” <- every hiring manager: “I’ll have what she’s having.” #TalentInnovation

9. When we simply had to celebrate National Pirate Day

How do pirates prefer to communicate? Aye to Aye! (sorry). Yes, Tuesday was International Talk Like a Pirate Day. Yes, we decided to commemorate it. Conference attendees found eye patches, hooks, headbands, and pirate swords underneath their seats so that they could join in the celebration.

Talking like a pirate at the @Lever conference. Arrrr. pic.twitter.com/QPTWmIpzok

Lou shared 40 years of recruiting experience… in 35 minutes. When he also announced that he’ll be retiring after next year, there was a synchronized, audible moan in the room.

7. When two of our Leveroos serenaded attendees with a musical mash-up

While we were enjoying cocktails and mingling on the terrace Tuesday evening, Andreas (from our Design team) and Josh (from Product) surprised the audience with a musical tribute to the complicated relationship between candidates and recruiters.

Officially, Anna Lambert’s keynote was titled “The Art and Science of Scaling a World-class Recruiting Team”. Unofficially, it was called “How Not to Ruin your Company through Terrible Recruiting Practices”. After building her own team at Shopify, she challenged our audience to look beyond formal professional experiences. She told us about how Dallas, a former army officer, Allie, a former welding apprentice, and Portia, a former lawyer, all comprise her recruiting team.

And we’d be remiss if we didn’t share the final way she asked our audience to recruit thoughtfully: “You’re all interviewing future Shopify employees and I don’t want you to break them.” Thanks for making us laugh, Anna. Glad you had as much fun as we did.

5. When we became convinced that Medallia only recruits broadway performers

During our session on how to effectively roll out new HR tech, we shared a short music video from Medallia. In it, the team sings to explain how Lever is going to revolutionize their hiring experience. And somehow, every employee seems to a badass recruiter, singer, dancer, actor, and comedian. We exaggerate not. (Don’t worry, we’re getting our hands on this video as we speak).

@Medallia‘s video on rolling out Lever is more awesome than we could have possibly imagined. #HRtech rollout for the win. #TalentInnovationpic.twitter.com/IvHnPSijXr

4. When Veon gave Medallia a run for their money

Medallia isn’t the only team with a knack for video production. Another one of customers, Veon, also created an epic video when they rolled out Lever. What’s more? Veon is headquartered in the Netherlands, but it was their team in Pakistan that made this video, and showed our audience just what it means to ‘crush HR tech implementation’.

We can’t stop smiling at this video from @VeonDigital on rolling out Lever. This is how you get your team excited ?. #talentinnovationpic.twitter.com/LpOkWymueH

3. When no one in our audience could stay in their seats

Shannon Scott, Founding President of United Equality Consulting, candidly told us the story of how she found the courage to embrace her gender identity. Then, she proposed that each of us to implement three changes. Our audience couldn’t help but give her a standing ovation.

Thank you, Shannon Scott @United_E_C, for presenting on such an important topic! @Lever #talentinnovation pic.twitter.com/wxaMSdPZKk

2. When we ditched ho-hum speaker introductions

Wondering why there are two stunning acrobats in the featured photo of this post? Because just before Xavier Poulin-Gladu gave us a lens into the unique candidate experience at Cirque du Soleil, we did our best to create a unique experience of our own for Summit attendees.

Alright @Lever this is just bananas. @Cirque do I get this above my desk if I work in your talent team? #TalentInnovation pic.twitter.com/HkR5CWyRgU

1. When we learned to take a chance (and the compelling origin story of shot clocks)

Roman Mars leads one of the most popular podcasts in the world, after dropping out of graduate school to “work for free” at a radio station for 3 years. Despite having no experience, the radio station took a chance on him. He advises all of us to take a chance on people who are passionate about what they want to do, even if they have “no business doing it.”

Added bonus? Roman taught us how the basketball shot clock completely revolutionized the game. What a surprising, novel example of how a small innovation can make a powerful impact.

That’s it for our recap, but if you want to see all these moments for yourself, sit back and enjoy our free live stream recording!

If you're headed to Las Vegas next week for UNLEASH America, let's connect! The UNLEASH conferences are some of our favorite HR tech meetups because they are themed around the future of work and the role of technology in empowering...
Read more
This site uses cookies to offer you a better browsing experience. Learn more.