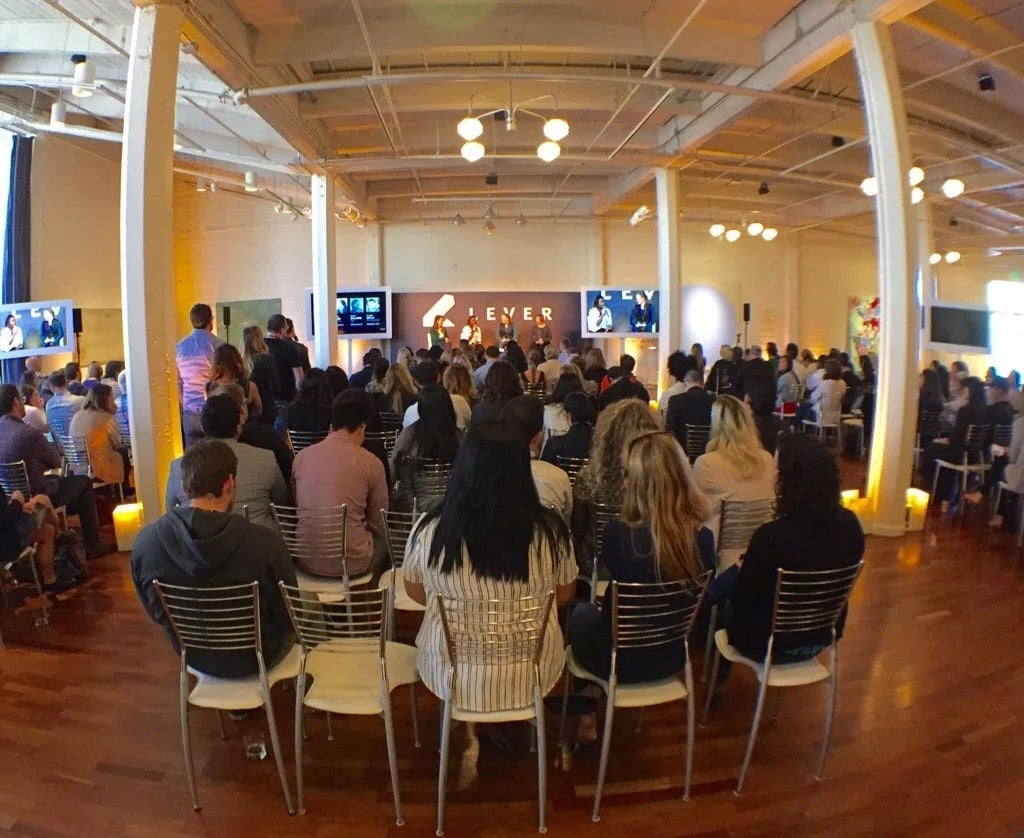 Innovation was the name of the game at Lever’s inaugural Talent Innovation Summit Tuesday, when industry leaders, analysts, and practitioners with an incredible range of experiences came together to share fresh, sometimes groundbreaking ideas. We walked away from the day’s sessions and conversations nothing short of invigorated and inspired by our peers.

Old friends reunited and new friends were made, and now at Lever we have some serious post-Summit blues, but we’re already looking forward to next year. If you didn’t make it this year, here’s a taste of what you missed – from Lever’s exciting product announcement, to a heated debate on the Future of ATS and a passionate discussion about the latest in D&I – in tweets.

1. When we unveiled Lever Nurture and one recruiter declared that it’s going to change the world

We couldn’t wait to kick off the Summit by announcing our second major product, Lever Nurture. It’s designed to drastically improve the way you source candidates and free up valuable time to focus on what really matters: building meaningful talent relationships. We were stoked to see reactions like these:

Strap in, ya’ll!! @Lever Nurture is going to change the world! #talentinnovation

BOOM! Lever Nurture: Develop meaningful relationships with the right talent, at scale. #CRM is the #TA tool of the future #talentinnovation

Learn more about Lever Nurture here. Or listen to our our live stream replay to hear us introduce it in our opening keynote (the announcement starts at minute 16:30 into the morning recording).

2. When Nellie Peshkov told us that #talentinnovation is about finding stunning colleagues (and reminded us that “stunning” is a great word)

“Innovation in recruiting is not about having the coolest tools, it’s about finding stunning colleagues” @nellie_peshkov #talentinnovation

“For us, innovation is one thing & one thing only: finding strong stunning colleagues”- @nellie_peshkov VP Talent @netflix #talentinnovation

“Our promise to people isn’t about perks… it’s a promise to work with stunning colleagues.” @nellie_peshkov #talentinnovation

Netflix has made a splash around the world for choices like doing away with a formal review process and nixing expense policy. To hear the secrets around how Netflix maintains its culture as they grow, listen to our morning recording at the 110 minute mark.

3. When it was time for lunch, but people were glued to their seats thanks to the Diversity and Inclusion panel

Our Diversity & Inclusion panel was stacked- with Head of Diversity and Inclusion at Yelp Rachel Williams, Director of Talent at Coursera Betty Tsan, and Head of Talent at Grand Rounds Inc. Alex Lebovic, all moderated by Georgia Wells of the Wall Street Journal. The dialogue gave our guests some seriously stimulating lunchtime conversation. Listen in at 155:30 of our morning recording to see what the hype was all about.

Truth. “No one want to be called a #diversity hire.” –@bettytsan #TalentInnovation @Lever @coursera

We’re dealing with a topic that our country can’t figure out. Your company won’t overnight. – @heymsrachel #talentinnovation

4. When there were too many mic-drop-worthy comments to count during the Future of ATS debate

The Future of ATS debate with recruiting industry heavyweights Matt Charney, William Tincup, Elaine Orler, and Kyle Lagunas, was perhaps the most anticipated session of the day, and it didn’t disappoint.

Hiring in 2025 – it won’t just be talent acquisition. It will be talent strategy. BOOM. @elaineorler #talentinnovation

Nailed it @mattcharney: want a competitive advantage in recruiting? Content is great but make the job descriptions better!#talentinnovation

Catch the entire discussion and Matt’s abundant eye rolls at 19:35 of our afternoon recorded session.

5. When panelist Kyle Lagunas had one of the proudest moments of his life

We’re proud of you too, Kyle!

One of the proudest moments of my life! Thanks @Lever for putting together such a great panel! #talentinnovation https://t.co/i9fPzToljU

6. When hiring managers had their very own session

Because we’ve always believed that hiring great teams is everyone’s responsibility, not just the recruiting team’s. Bryan Johanson of the Adler Group helped our hiring manager attendees raise their hiring game during our 2-hour interactive workshop.

Hiring manager workshop in full swing at #talentinnovation – wouldn’t be a collaborative hiring event without them! pic.twitter.com/r1wR4AJd2C

7. When Lyft’s Linsey Jackson took a selfie on stage

And the audience was all about it.

Recruiters live rejection. Candidates reject recruiters, and recruiters reject candidates. This inspiring closing keynote from Jia Jiang, the author of “100 Days of Rejection,” helped us think about rejection in a constructive (and way less scary) way. In other words, “just ask” is our new motto.

Tune in to 85:20 of the afternoon keynote to hear from Jia Jiang.

We take every “no” as an indictment and every “yes” as an affirmation. But really it is just an opinion. @JiaJiang #talentinnovation

Rejection is more a reflection of the rejector, not the rejected. It isn’t an indictment of your character. –@JiaJiang?? #talentinnovation

9. When we had a blast at the GIF booth and caricature station 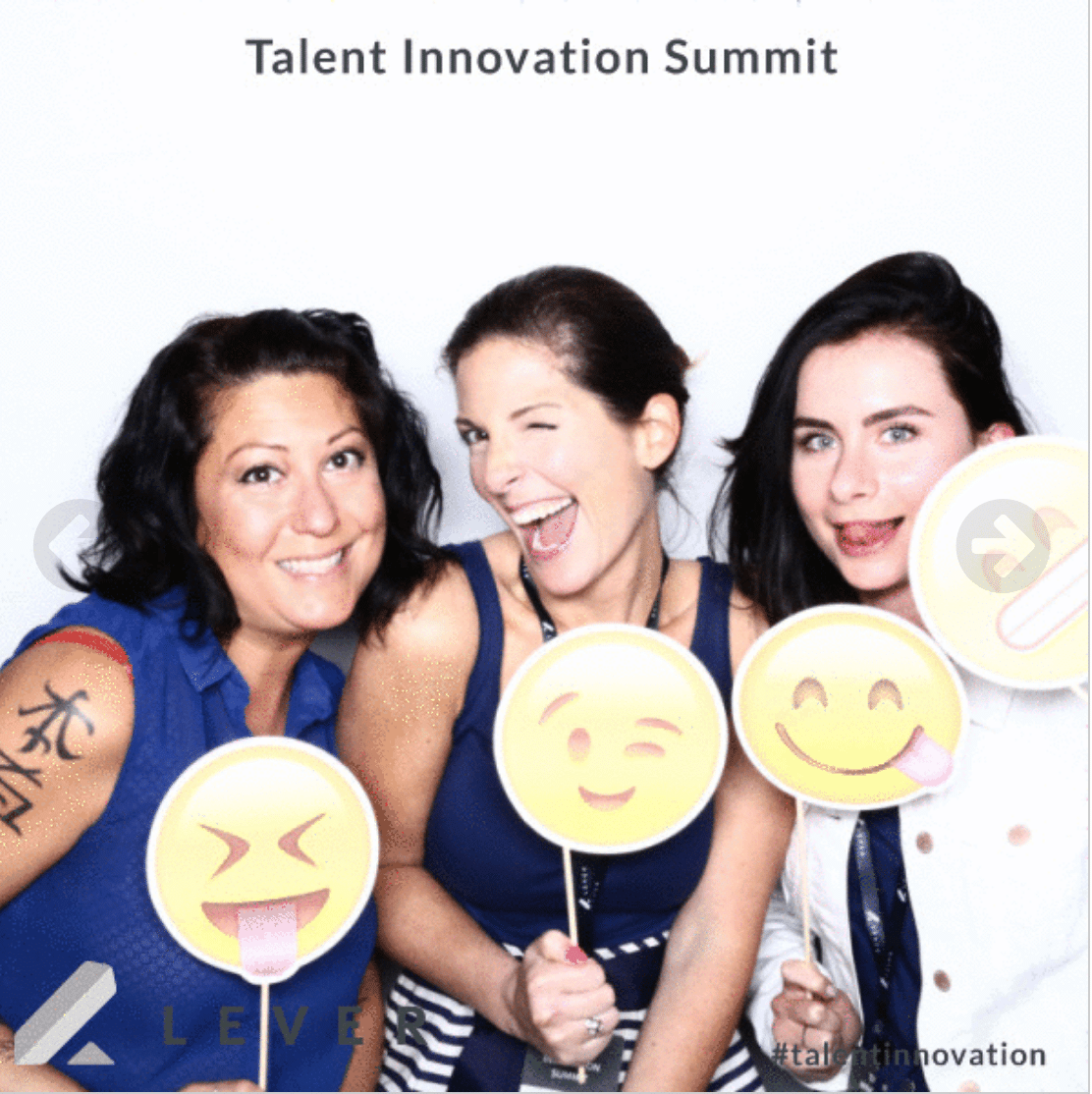 It wouldn’t be a Lever event without GIFs. And now maybe caricature booths will make future appearances, too.

Exhausted but still stoked from yesterday’s big day. Thanks to all who came out! #talentinnovation pic.twitter.com/xJ6yfJtZ6g

10. When we made new friends

We couldn’t be happier that our fellow talent innovators hit it off. Cheers to new friendships and more sourcing technique sharing in the future!

Final thought on #talentinnovation = meeting Greg from Facebook & sharing secret sourcing technique with each other was like best ever ?

We’re exhausted but inspired by our first-ever Summit – and based on early feedback, this will not be our last. A huge thanks to the hundreds who were at the event in person, and the hundreds more who joined us online and got us trending on Twitter – both here and in New Zealand – proof that the Kiwis prize talent innovation as much as any nation on the planet.

We’re proud to be regarded as an innovator in the HR tech space, but as our CEO Sarah Nahm said in her keynote, this event was in honor of you, recruiters. YOU are natural innovators because you strive to innovate every day, seeking the best hires, not the easiest hires. Your ongoing pursuit of innovation drives us and heavily influences our product direction, toward Lever Nurture and beyond. Thanks for being the catalyst for our journey!

If you're headed to Las Vegas next week for UNLEASH America, let's connect! The UNLEASH conferences are some of our favorite HR tech meetups because they are themed around the future of work and the role of technology in empowering...
Read more