Why the world needs another ATS

It was 2012 – Facebook had just gone public and bought Instagram. Flat design was the new hot thing. And the New York Times reported on Snapchat for the first time.  But something was happening that wasn’t in the news. Put your ear to the ground and everyone was obsessing about just one thing: hiring software engineers.

All our peers in Silicon Valley were starting companies, bootstrapping teams, and pressing everyone they knew for referrals. Intrepid eng managers were building custom data dashboards to track their talent pipelines and analyzing their interviewing process. The top-of-mind issue was not just how to recruit, but how to recruit the best.

Out of that environment, Lever was born.  We set out to bring world-class design and engineering to bear on the hard problem of hiring.

Our user research took us inside rapidly-growing, data-driven, and strategic companies who opened up to us about their process and problems. We uncovered a surprising contradiction.

Optimizing for the average was losing the best

Companies dedicated most of their resources to screening candidates who applied to job postings, despite the fact that those applicants made up a small minority of the people they’d ultimately hire. And they struggled to prioritize the high quality leads coming from employee referrals and proactive candidate sourcing.  Weirdly enough, the best candidates weren’t even tracked in a central tool – just email and spreadsheets.

As outside observers, we could see the warning signs. The tools, and therefore the process, focused on streamlining and optimizing for the average candidate, and meanwhile, companies were losing their chances with the best. Stripe’s CTO, Greg Brockman, expressed it well: don’t mistake a high volume pipeline for a high quality pipeline.

We believe that companies can invert their thinking and start designing their process around the great candidates, not the mediocre ones. But the tools must fundamentally embrace this, too. We at Lever share this mission with the companies that use our software.  We base our design principles on hiring the best, not the average.

Design for the best candidates

Everyone we met agreed: the best candidates come from referrals. Sure, it’s great to have a pre-vetted lead, but why did those candidates also accept offers at higher rates?  Often overlooked is the contribution of the referrer.  A referrer passionately explains the company’s product, attests to the strength of the team, and offers insights into the company culture.

In a survey of Bay Area software engineers, 81% indicated they would drop out if they were uninterested in the company or product.  And after interviewing, more wanted info about company culture and the role than info about salary and benefits.

The best candidates want substantive engagements with the people they’d be working with.

Yet most hiring tools explicitly restrict the access and contributions of exactly those people.  We at Lever believe that to design for the best candidates, you actually need an app that their future co-workers are engaged with so that their engagement passes on to the candidates themselves.

Design for the best process

After a decade of proliferating job boards, social media and the mantra “recruiting is marketing,” companies are drowning in applicants. Trying to direct the massive flows of high-volume pipelines, recruiters demand ever-more automation from their tools.

But break down your pipeline into people and there are three bands of candidates: the great, the terrible, and the average. The overwhelming volume comes from the average candidates, and designing your process to manage that volume is just a way of catering to mediocrity. The great ones can tell when they’re on an assembly line, and it’s a turn-off.

Meanwhile, we saw hiring managers and interviewers become overwhelmed and disengaged when asked to manage “flows,” but were responsive and participative when people were at the center. The whole process of getting feedback improved when “the process” got out of the way.

When we were prototyping an early version of Lever, we built an upvote/downvote rating system, thinking that hiring manager would love flipping through candidates speedily and efficiently.  It totally failed.  Voting felt like an unending chore, and the very speed that made it convenient also made it feel like you hadn’t done anything meaningful. People wanted to express their thoughts about potential colleagues in words, not upvotes.  Conversations have since become the heart of Lever’s design.

Design for the best companies

It’s an exciting time to build tools for hiring because so many role models – entrepreneurs, investors, CEOs – are talking about hiring right now. The innovative, explosively growing, awesome companies we’ve partnered with in our beta are all companies for whom hiring top talent is a strategic priority, not a chore. And they’ve made it a company-wide effort, not just a task for an isolated recruiting team.

These forward-thinking companies have challenged us to build a hiring platform that is the center of a company’s culture, not just a fringe team.  That means a harder design problem with many more stakeholders: interviewers and hiring managers across the company, Directors and VPs in HR, Finance, People Operations, and more.

The best companies believe that the hiring tool should be used by everyone.

It should be effortless to bring people into the conversation, to have a discussion, to make a group decision. For the typical applicant tracking system, supporting internal communication is all just an afterthought; we believe that great communication is fundamental for making efficient decisions.

To get your entire company involved in hiring, start hiring with Lever. 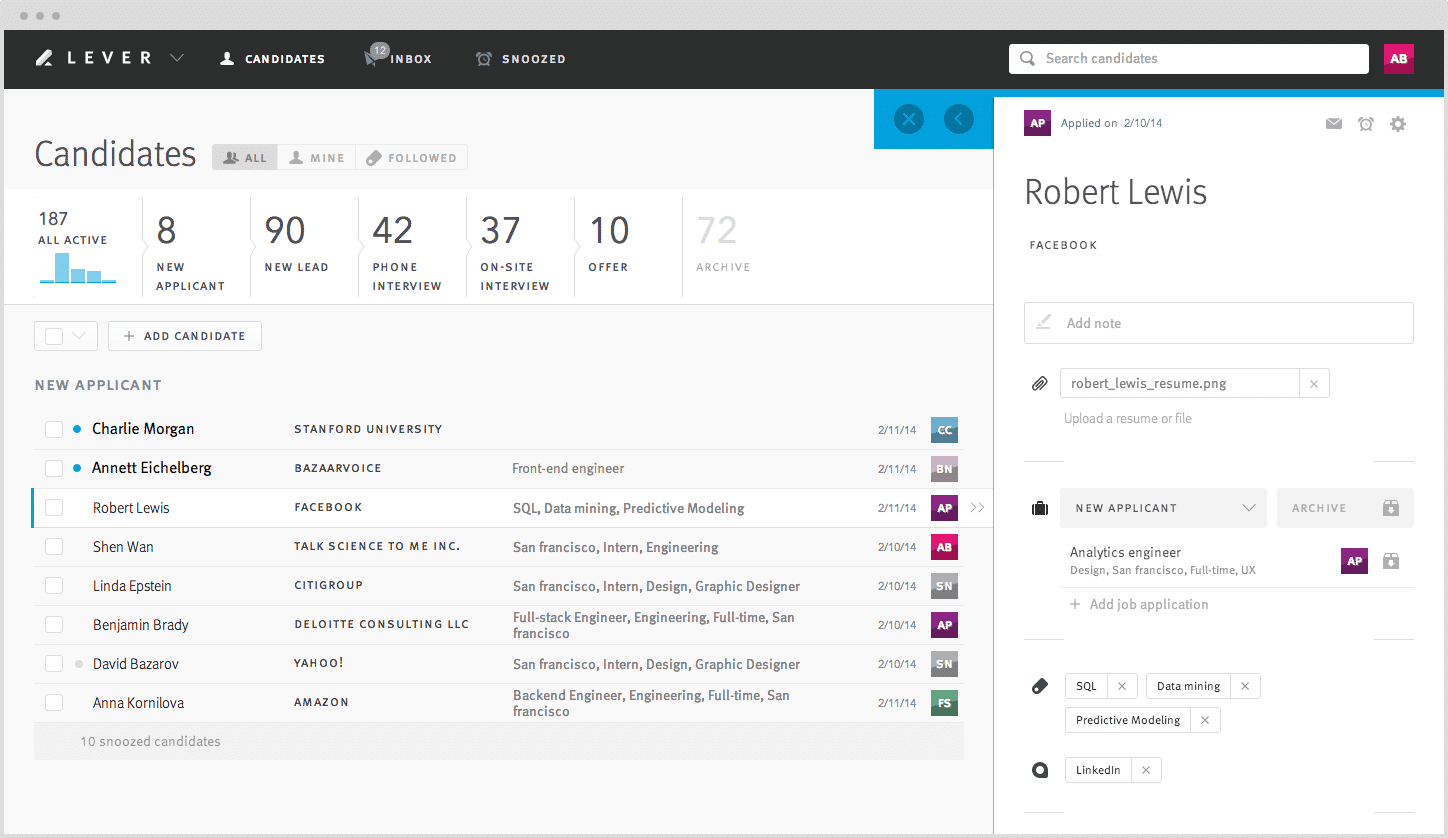 Many of us are having to confront a new reality in which remote work and social distancing are either mandatory or highly encouraged. At Lever, we’ve decided to move to a fully remote model for interviewing, and we anticipate that...
Read more