How to Hire for Neurodiversity: 4 Simple Tips 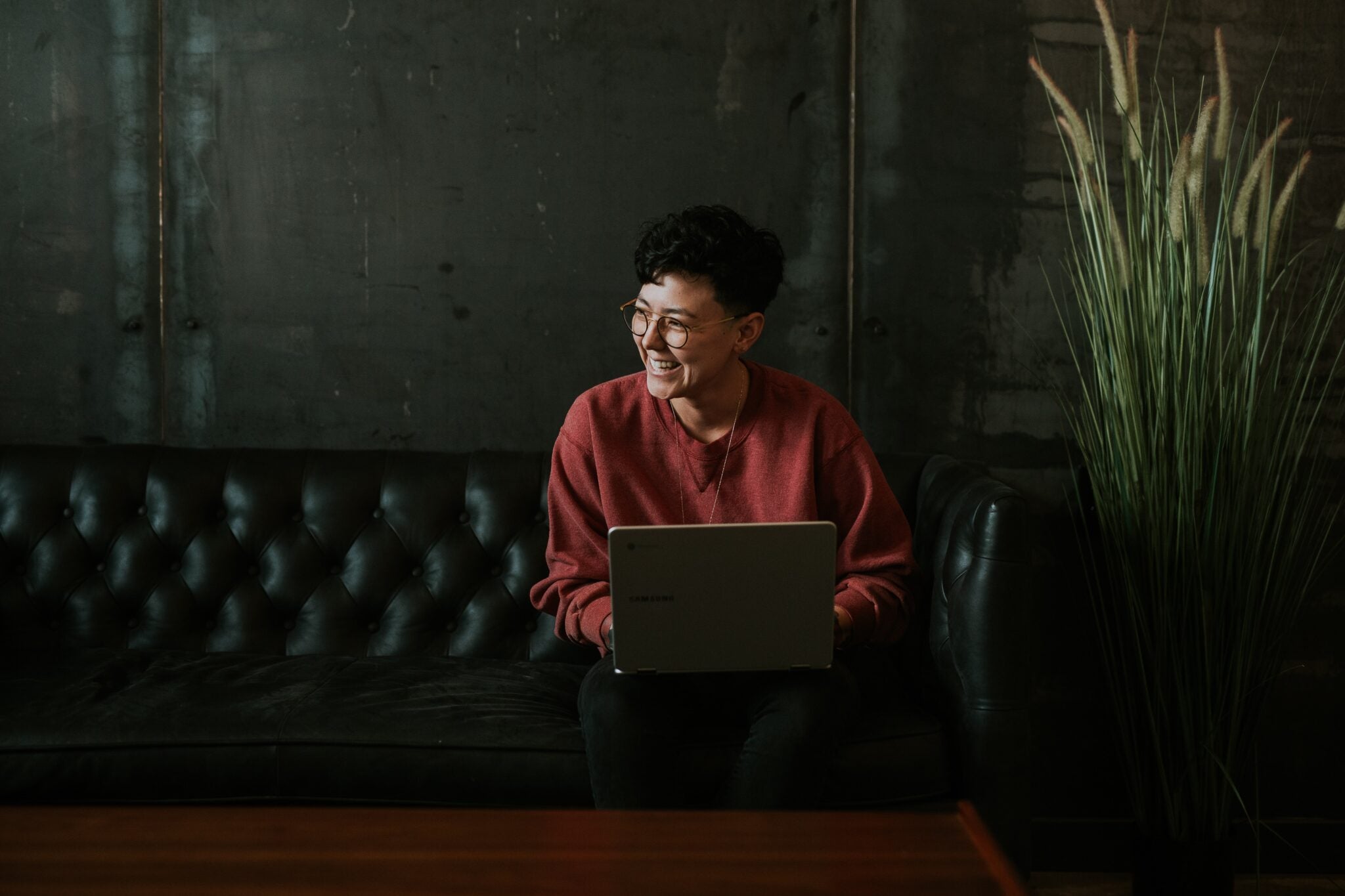 Studies have shown that despite the many benefits organizations can reap from working with neurodivergent talent, these individuals continue to be overlooked in favor of neurotypical candidates and better ‘culture fits.’ In the UK, for example, just 22% of autistic adults are employed, while roughly 85% of autistic university graduates in the US have been unemployed.

In bypassing neurodivergent talent, organizations are giving up significant opportunities to not only educate their company on neurodiversity but also hire and retain talent that can drive innovation in their business through visual and creative thinking, fine detail processing, analytical skillsets, sequencing, and much more.

This is where recruiters and hiring teams can have a sizeable and tangible impact on business objectives—all while driving diversity, equity, and inclusion (DEI) within their organizations. However, recruiting for neurodiversity can be nuanced and requires hiring teams to do both strategic and tactical work to improve their recruiting process.

‘Neurodiversity’ is a relatively new term that refers to autistic people (ASD), dyslexia, dyspraxia, ADHD, and other neurological conditions. These include‌ ‘spectrum conditions’ with a wide range of characteristics.

Many neurodivergent people have extraordinary subsets of skills, including skills in mathematics, art, analysis, pattern recognition, and more.

“Our strengths and weaknesses are often less common than those in the general population, bringing our diverse ways of thinking, experiencing, and processing information (and the world around us) to help round out a team. We approach problems differently because of our varied perspectives and may see things others miss,” says Lyric Holmans, Organizational Change Agent and Educator with NeuroDivergent Consulting.

And yet, many organizations fail to understand neurodivergent talent, as neurodivergent people can struggle to fit the ‘mold’ or ‘profile’ sought by employers for open roles.

If we think of neurodiversity as an ‘umbrella,’ then people typically fall into one of two categories: neurodivergent or neurotypical.

Those considered ‘neurotypical’ are often described as having standard or typical brain processing and behaviors that are considered compatible with the society and culture in which we live. In the past, neurotypical people would have been labeled as ‘normal’ in comparison to neurodivergent individuals.

Being neurotypical is rooted in the idea that, because your brain works in much the same way as other people’s do, you needn’t think about how your brain functions or how your behaviors manifest as a result of it.

Neurotypical standards, goals, and expectations are often projected onto neurodivergent people, which can set them up for failure. Neurotypicalness isn’t the default for humanity—it’s just what we’ve come to know mostly through our dominant culture.

However, ‘neurodivergent’ people are often made aware that their brains function differently. For neurodivergent people, the brain has one or more ways of functioning that are considered outside of the ‘typical’ way a brain functions.

For example, OCD, ASD, dyspraxia, and Tourettes are common neurological conditions that neurodivergent people can be diagnosed with.

Neurodiversity advocates for embracing these differences rather than trying to ‘fix’ or ‘cure’ them, recognizing that thinking or behaving differently can be beneficial to both people and businesses and that assuming there are ‘normal’ versus ‘abnormal’ ways of functioning limits us as individuals and organizations. 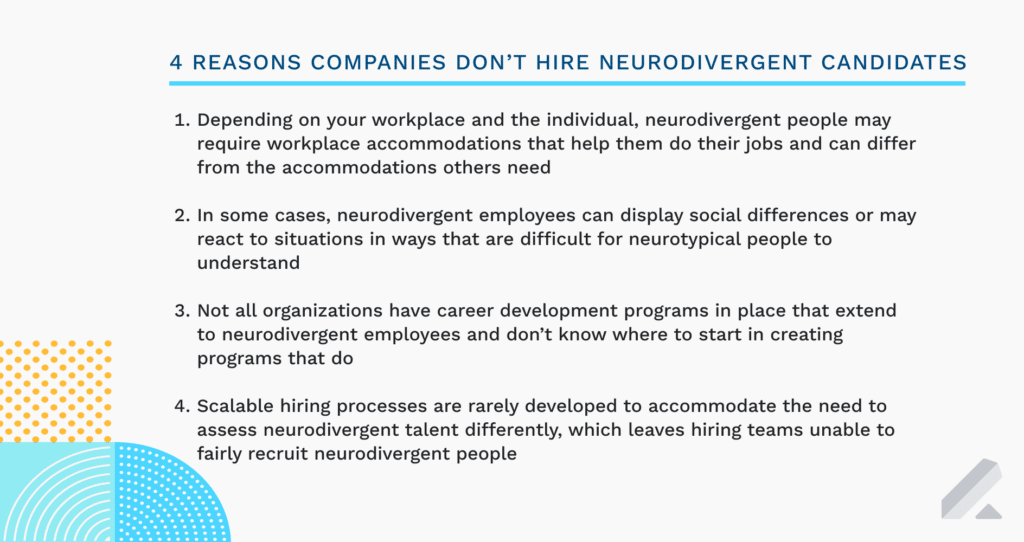 Why you should recruit for neurodiversity

Above and beyond factors like the Great Resignation, Great Rehire, and major skill gaps afflicting companies globally, neurodivergent people can bring a wealth of unique skills, perspectives, and experiences to your workplace that benefit both the business and other team members overall.

Some of the top reasons companies large and small are prioritizing the recruitment of neurodivergent people include:

As companies work towards hiring more neurodivergent talent, there will be an increasing need for hiring teams and talent acquisition leaders to rethink how they recruit and optimize their hiring practices to be inclusive of both mental and physical diversity.

Given nearly 1 in 44 people you interview are likely to have an autism diagnosis, companies can no longer afford to pass up on neurodivergent talent simply because recruiting processes haven’t been adapted or updated. If you consider Dyslexia, ADHD, Hyperlexia, Dyscalculia, OCD, and other neurodivergent brain types, the numbers are significantly higher.

There are many advantages of having a neurodiverse workforce, but let’s look at the top ones your organization could benefit from:

4 tips for hiring for neurodiversity

To build a neurodiverse workplace, we first need to understand that ‘neurodiverse’ and neurodiversity both encompass everyone. Much like diversity applies to a wide variety of backgrounds, experiences, and perspectives, neurodiversity points to the range of differences in our brain functions and behaviors. With neurodiversity, we regard these differences as being part of the normal variations found in who we are as human beings.

How do you foster a neurodiverse workplace, though? How can recruiters, hiring managers, and talent acquisition teams make it so that their workplaces are built on neurodiversity from the ground up?

There are 4 key ways your hiring team can contribute to fostering a neurodiverse workplace: 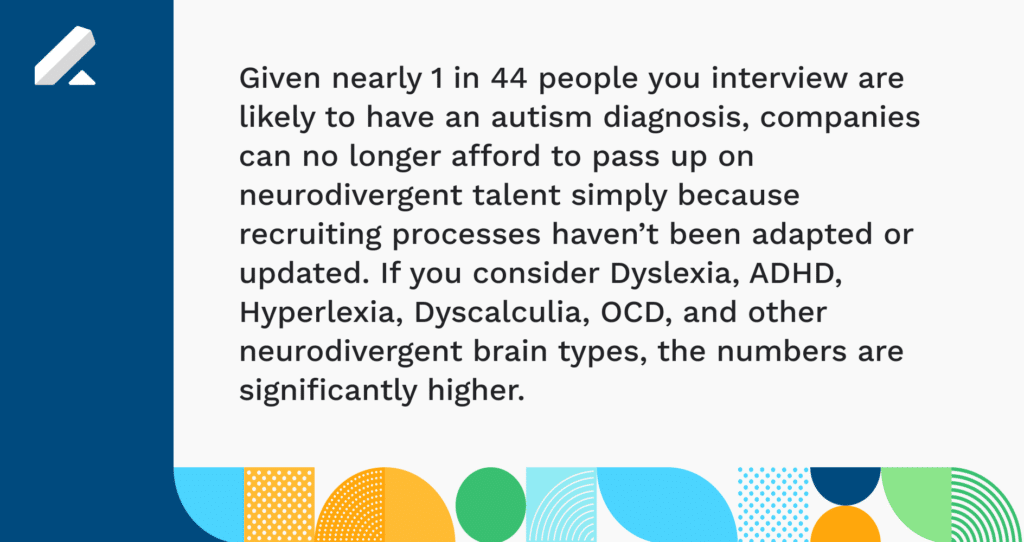 This may seem like the obvious first step, but in order to create inclusive recruiting practices, you’ll need to ensure that your team:

Optimize your DEI initiatives to include neurodiversity

Are your recruiting practices:

In other words, recruiting is just as much a part of your ongoing DEI initiatives as ERGs, activities, compensation benchmarks, and more.

For example, you can organize professional training sessions for hiring teams as well as your entire organization that help employees recognize neurodiversity and learn how to work alongside neurodivergent talent within your company. Training like this isn’t just for recruiters—it should apply to everyone involved, but especially managers and those in senior leadership roles who oversee teams and guide inter-team communication.

In a nutshell, universal design drives equality in your workplace by ensuring people make decisions that benefit everyone, not just one or a few people. Let’s say, for example, that your leadership team wants to hire a coach to educate your company on your neurodiversity.

By hiring an autistic neurodiversity expert to coach your entire company, as opposed to hiring a coach to teach only neurodivergent employees, you’d be leveraging universal design.

Attract, hire, and retain neurodivergent talent with our Recruiter Guide

In a world where more organizations are celebrating diversity in many of its forms, neurodivergent talent continues to be overlooked despite the many benefits of working with neurodivergent people. However, as with all diversity, equity, and inclusion efforts, hiring for neurodiversity is not a one-and-done initiative. It requires a stringent commitment to making measurable improvements in how you hire and practice diversity recruiting.

To support your hiring team in building stronger partnerships with hiring managers to recruit and retain neurodivergent talent, download your free copy of our Neurodiversity Recruiting Guide!

How to Strategically Hire for Senior Executive Roles

When was the last time you hired a senior executive only to watch them churn and leave your organization a year or less, later? To hire for senior executive roles is no easy task. While you’re sourcing and recruiting top...
Read more

In this candidate market — many recruiters are feeling the heat and frankly burning out along the way. The good news is that May is a time to reassess plans, create space for flexibility and make time for everyone’s mental...
Read more

After parenting and managing people for a decade, I’ve learned a thing or two about presence. Whether it’s listening to my kids tell me for the fifth time which street they would take to school, or ensuring I don’t have...
Read more