How to Coach Your Team to a Recruiting Touchdown 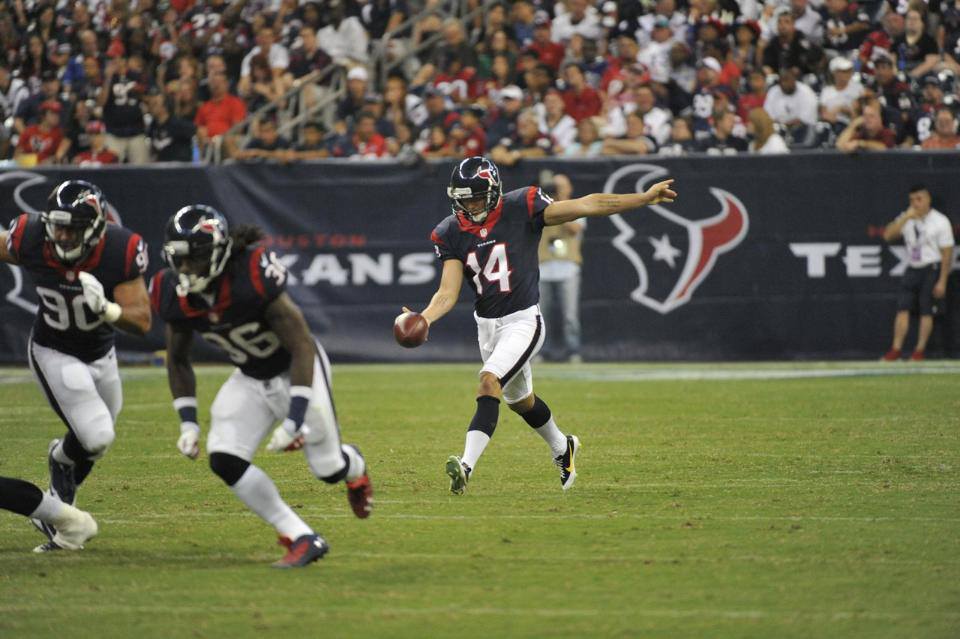 This Sunday, my New England Patriots will make their 9th Super Bowl appearance. My mother is from Boston, so I think I entered this world proudly donning a Pats shirt. Love for this team courses through my blood, and it has for as long as I can recall.

But this Super Bowl Sunday is special. In three days, my favorite team is competing for the Super Bowl in a stadium I once played in.

In April 2013, the Houston Texans called to offer me a free agent contract. The NFL was never my dream; my high school coach told me a crazy stat that only 1.5% of high school football players make it to the NFL. Somehow, I wound up in the 1.5%. When I played as a punter for the Texans, I remember running hundreds of drills on the same grass the Patriots are likely practicing on right now.

My NFL days are behind me, but the lessons I learned aren’t. Every day I talk to CEOs, recruiters, and hiring managers who are struggling to find amazing talent. And often, I have this strong urge to give them advice in football terms. Don’t laugh; there are more similarities between recruiting and football than you think.

With that, here are six transferrable lessons from my days as a professional football player:

In football, the coach is the brains behind the entire operation. Their job is to outline a strategic game plan that tells each player what role to play and which tactics will make them successful. Just as important is their ability to communicate effectively with players. They have to be the team motivator, cheerleader, confidante and organizer all at once.

Recruiters, I’ve learned that your job isn’t terribly different. As the seasoned hiring expert, your team looks to you for guidance on every interview process. They’re counting on you to decide if or when there’s a phone screen; they seek your advice on how long they should spend asking  questions. When you train them on which criteria to evaluate, they are immediately able to perform at a higher level.

Granted, your role as coach is incredibly challenging, especially given your hiring team is juggling many other priorities. But if my conversations with so many of you have taught me anything, it’s that you’re up for the challenge.

2) Treat your hiring manager as the quarterback.

Once a quarterback gets the game plan from their coach, their job is to bring it to the rest of the team. But in situations where the game doesn’t go according to plan, the QB is the one who adjusts on the fly. As a result, teams rally around the quarterback and rely most heavily on their leadership.

The same is true of hiring managers and their teams. Frankly, candidates don’t join a team solely because of the recruiter, they join for the leadership abilities of the hiring manager and for the experience of working toward a common goal with them. Hiring managers won’t always have an innate knack for recruiting, but their role in the interview process is essential, and they typically bear the consequences of good and bad hiring decisions. In your coach role, you need them to step up, be accountable, and take that responsibility seriously.

3) You need to be able to crush a two minute drill.

In football, the two minute drill often occurs at the end of the first half or game. When teams need to score or else lose the game, they run this play as a last-ditch effort. It’s the definition of a make-or-break moment.

That two minute drill also happens in recruiting. One moment, it may look like your candidate is ready and excited to join your team. The next, they may get an offer from another company. That’s when it’s time for the two minute drill. To convince your candidate to join, you have to move at lightning speed. At the same time though, you have to move strategically. If you fumble and give them the wrong information about their offer, for example, you might quickly lose the game.

I’m going to let you in on a secret: every single NFL team has what’s called a “war room”. It’s a room covered wall-to-wall in white boards, featuring the names of every single player they think could play on their team. The white boards display player resumes, contact information. That way, the staff can reach out to someone ASAP when their contract is ending with another team.

What’s your war room in recruiting? How are you keeping track of the candidates you’re competing for? Just like you need to stay updated on football recruits, you have to actively seek out information on candidates. Then, you have to organize it. I know I work for Lever, but please, please invest in an ATS (applicant tracking system). Competition in this industry is relentless, and the only way to beat out other companies is to better keep track of and engage candidates better. Make your whiteboard endless!

5) Bring your playbook to work, and create one for your team.

Coaches live by their playbook. No matter what, they bring a card to each game that lists the plays they might call. Similarly, even the best NFL players have a play wristband during the game. Great preparation plus execution is what sets the legendary teams apart from the good ones.

Why shouldn’t your interview team prepare just as diligently? The first step, of course, is making sure you map out your playbook for the process and  set your interviewers up for success. Here’s what I tell recruiters and hiring managers each day: prepping your team is one thing, but you also have to give them a scorecard that helps them ask the best questions and easily record the answers. Guide every player on the team a distinct job in the interview process – if every person asks the same set of questions, you’ll bore the candidate senseless and you won’t learn everything you need to about them. Steer each interviewer towards certain areas to focus on, and they’ll perform better. In turn, their success will bring you one step closer to hiring the candidate you want.

6) Study your past film over, and over again.

You can’t just look straight ahead, in football or recruiting. Whenever we’d lose a football game, we’d watch that film over and over again to learn from your mistakes. Sometimes, I would watch the recording of a lost game so many times that I memorized every play. I could predict every single player’s next move down to the second.

My last suggestion? Watch your past film in recruiting too, and memorize it. When a candidate doesn’t accept your offer, or if you hire someone who proves to be the wrong person for the job, huddle with your team to reflect upon what you could have done differently. Then, write your thoughts down so you never make the same mistake again.

I could go on and on about football all day. After working at Lever, I could go on and on about recruiting too. Whichever team you’re rooting for on Sunday (and you know where my allegiances lie), take a moment to empathize with Dan Quinn or Bill Belichick, and think ahead to your next two minute recruiting drill. Here’s hoping it results in a game-changing touchdown for you and your team!