A lot has been said recently about building an inclusive workplace for women—including mothers—but dads are too often left out of the conversation. The modern family and gender roles have evolved beyond men as breadwinners and women as caregivers. Many families now have dual earners, and parents share childcare responsibilities at home. However, the modern workplace has not adapted to the modern family. Working parents face challenges when it comes to things like lack of paid parental leave, long hours away from home, and inflexible schedules when they need to care for a sick child, among other things. It’s no surprise that a 2016 report, State of America’s Fathers, shared that 63 percent of parents who work 35-40 hours a week, and 73 percent of those who work more than 40 hours a week, feel that they do not spend enough time with their children. While today’s fathers spend 65 percent more time with their kids on workdays than they did 30 years ago, it still isn’t quite enough. It’s time to build a more inclusive workplace for dads which, by extension, further advocates for women in the workplace as well.

The report shares how fathers have historically experienced a “daddy bonus” in their salary and career trajectory—simply due to their status as fathers. When they try to balance or prioritize childcare responsibilities, however, they report the same “parent stigma” that mothers do. The truth of the matter is that the modern workplace is not family-friendly and that most organizations can make strong improvements when it comes to building an inclusive workplace for both mothers and fathers alike. This may include building career paths and development plans for every employee, and awarding salary increases and promotions based on merit. It may also include more flexible work arrangements, such as remote work, flex schedules, and part-time opportunities. By eliminating the “Daddy bonus” and the “Daddy stigma,” you can build a more inclusive workplace for everyone.

Companies can also help eliminate the “Daddy stigma” by implementing more inclusive policies. For instance, paid family leave for both parents can give dads the time they need to bond with, and care for, their children. The report shows that 88 percent of Americans don’t have access to paid family leave through their employers, and 40 percent are ineligible for even unpaid leave under the Family and Medical Leave Act. In the absence of paid leave, women—who tend to earn less overall—generally stay home with their children. This financial decision essentially robs male partners from that wanted—and needed—bonding time with their children, while effectively reinforcing gender roles. In the absence of an adequate national leave program, some organizations are taking matters into their own hands to offer paid family leave programs to employees. While these policies immediately affect people who work in organizations large enough to afford them, they may have the power to affect cultural change. For instance, Facebook CEO Mark Zuckerburg helped normalize paternity leave when he publicly took his own after the births of each of his children. This sends a powerful message to Facebook employees, as well as the rest of the world, that it’s ok to take advantage of these policies and programs. 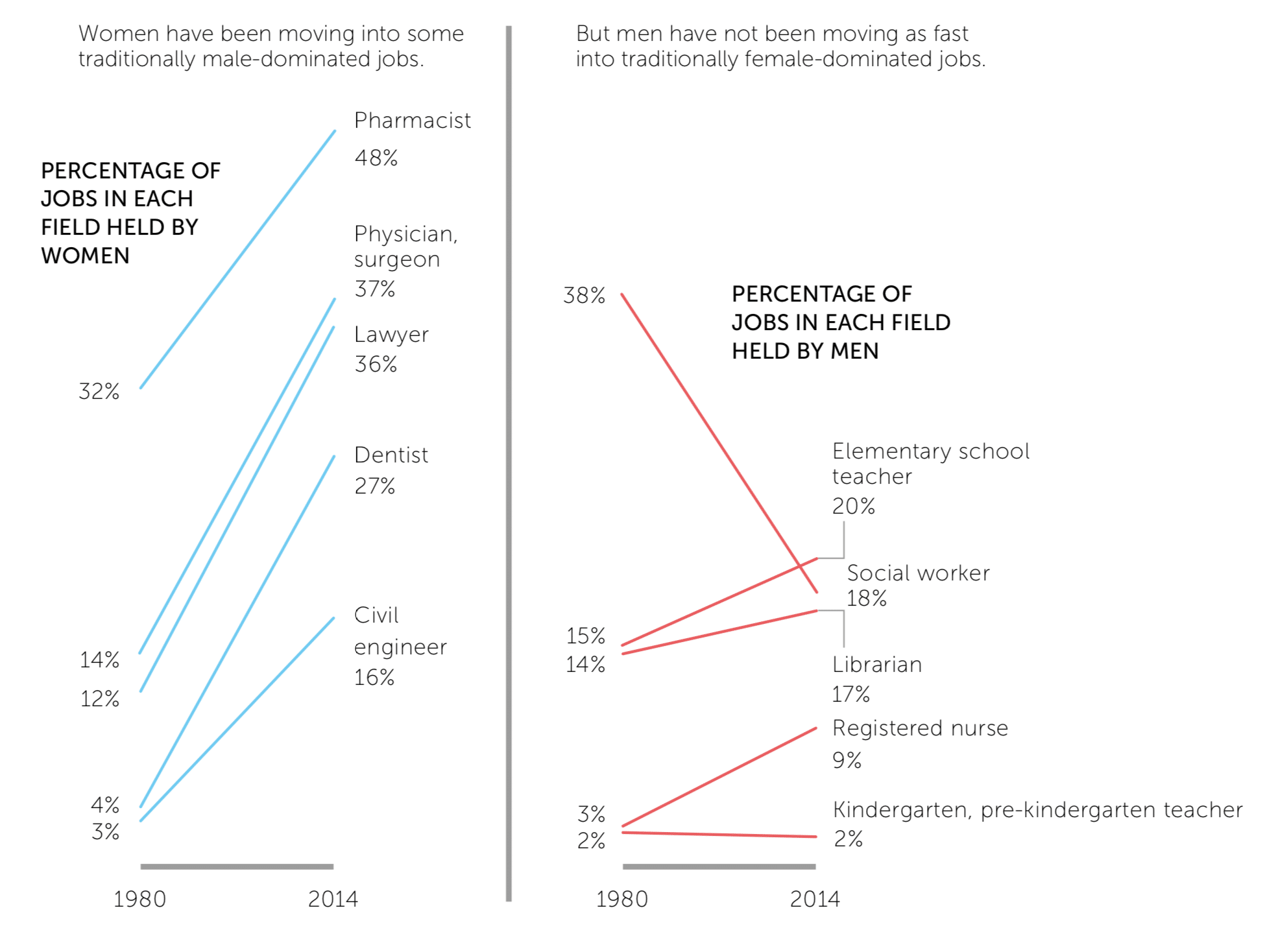 Many of these female-dominated roles are considered caregiving roles, so it could be argued that a cultural shift will impact the percentage of men holding jobs in these areas. In addition, men need to be welcomed and encouraged into those roles. It’s not uncommon for a man in a childcare setting, or a male nurse, for instance, to be viewed as out of place. As men’s caregiving roles at home become more visible in the workplace, and more normalized in society, perhaps men working in paid caregiving roles will normalize as well.

Our society has encouraged women in the workplace, and tries to make a more inclusive environment for them—but has not done the same to encourage men as caregivers. The reality of the American family and workforce is that 81 percent of parents live in a dual-income household. Parents are sharing the workload—both in the home and in the office. While dads are more involved in their children’s lives than they have ever been, the workplace—and society as a whole—has stigmatized men as caregivers. We certainly have some work to do in this area, to build a more inclusive workplace for dads, as well as their partners.

To learn more about building an inclusive workplace, download The Diversity and Inclusion Handbook.